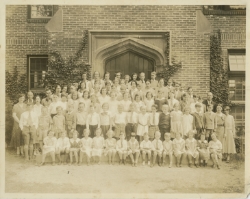 The Rumson Country Day School was founded in 1926 by a group of families in the Rumson area. This new school, called the Rumson School, was located on the site of the former St. Georges-on-the-Hill church; the building and 2 ½ acres of land were donated by Edward Dean Adams, a neighbor and grandfather of one of the charter students.

The school doors opened on November 1, 1926, with twenty-three pupils, a Headmaster, five teachers, and three staff members. An educator named B. Lord Buckley, founder of several independent schools in the New York metropolitan area, served as organizer and advisor.

Although our program has been updated and refined through the years, Buckley’s basic philosophy of a traditional, academically-rigorous liberal arts program continues today. Our school, which was incorporated as The Rumson Country Day School in 1942, teaches English grammar and literature, mathematics, science, social studies, languages (French and Latin, with Spanish added in the 1960’s), visual arts, music, physical education, and interscholastic sports. Students in grades N-5 are divided among heterogeneous homerooms. In grades 6-8, classes are departmentalized and honors sections are offered in English, math, and modern language.