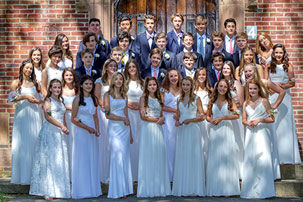 On Friday, June 14, The Rumson Country Day School Class of 2019 was celebrated at the annual commencement ceremony on the RCDS lawn. This year, thirty-eight students received their diplomas from Head of School Jayne Geiger and Board of Trustees President John Devlin.

“This is a bittersweet day,” said eighth-grade commencement speaker Adele Bender. “It is the last day we will walk down these hallways and shake the hands of our dear teachers, the last day we will sing our school song, the last day we will be gathered together under the roof of our sweet school. But we will march with the leadership and independence we have learned from our Rumson school— our heads held high and our eyes sparkling.”

RCDS prides itself on instilling the character and confidence that Adele exemplified during her speech. The strong educational foundation, the leadership and independence unique to RCDS graduates that Adele mentions are keys to success in secondary school and beyond. As the ceremony continued, The Class of 2019 was recognized for their achievements with awards. After the presentation of awards and diplomas, the graduates performed the school song, one last time as a class, to close the evening.

The Athletic Department Award, given to the athletes in the graduating class who best exemplify the qualities of athleticism, participation, spirit, and sportsmanship, was given to Paige Cecil and Bryce Devlin.

The Blake Award, named after Edgar Bond Blake who served The Rumson Country Day School for 40 years, was given to Angie Getze and Julian Magherini to acknowledge their exemplary service to RCDS.

The Swede Joseph Chevalier Memorial Award was presented by Swede’s mother to honor Mallory Aronne and her display of kindness and humility towards fellow students, devotion to growth and originality, and perseverance to goals.

Board of Trustees member, alumnus and current parent Carl Reiss proudly presented The Theodore K. Reiss Memorial Award in memory of his brother Ted Reiss. The Reiss Memorial Award was given to Grace Gibson who best exemplifies the spirit of good sportsmanship in all phases of school life.

Chloe Constantinopoulos was presented with the Highest Scholarship Award, which recognizes the graduate who has attained the highest level of scholarship in the Upper School over the last three years.

Aidan MacManus received the Trustees Prize which honors the student with the most outstanding qualities of scholarship, sportsmanship, leadership, and character.

RCDS proves an outstanding record of secondary school placement and this year’s graduates are no exception. The Class of 2019 plan to attend the following secondary schools:

Click here for photos from the RCDS Class of 2019 Graduation Ceremony.

A Deeper Dive with Mrs. Malia
Oct 11 2022
Students Venture into the Wild and Out of Their Comfort Zones
Oct 1 2022
New Faculty and Staff Join RCDS
Sep 16 2022
Student Talent Blossoms at Arts Festival
May 24 2022
Once Again, Students Conquer National Latin Exam
May 17 2022